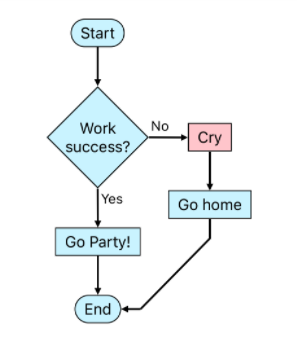 Why do you build this?

I often draw a flowchart to help understand some complex logic. It can also serves as a reference document for other engineers and testers. To draw one, I usually use popular tools like https://docs.google.com/drawings or https://app.diagrams.net/. However, I find it slow and tedious to do simple stuff like node alignment, auto text content hugging, adding arrow between nodes, or just adding arrow annotation. Not to mention that most of these styling will be out of place one you insert new nodes in between or update existing text.

Working with UIKit autolayout for years makes me aware that all of these UI styling can be handled in code very easily. Moreover, with the new SwiftUI, we can see live previews of the flowchart as we add each line of code. This will make flowchart drawing much faster and enjoyable.

This project is stil in early stage. Feel free to suggest features and fixes. 🙂

I know some other library has the same name, like https://github.com/Swift-Kit/Swift-Flow . But I still prefer this name.