RxFireAuth is a wrapper around the Firebase Authentication SDK that exposes most of the available functions through RxSwift objects. as well as improving the logic around managing and handling accounts throughout the lifecycle of your app.

Firebase Authentication is a great way to support user authentication in your app easily. This library builds on top of that to simplify even further the process with pre-built algorithms that support registering, logging-in, linking accounts with other providers, and more.

Looking for the Android version? You can find it right here.

RxFireAuth is available through CocoaPods and Swift Package Manager (in Beta).

To install RxFireAuth in your project add:

To install RxFireAuth in your project, add this repository as dependency using Xcode or add the following in your Package.swift file:

The Google SignIn SDK is not available through Swift Package Manager and it is automatically replaced by a standard implementation of AppAuth.

To find out the latest version, look at the Releases tab of this repository.

To get started with RxFireAuth, you can download the example project or dive right into the documentation.

This library includes a sample project that shows how to implement all the functions of the library on both iOS and macOS.

Note: the Firebase Console does not support macOS apps, so you'll have to add the macOS version as an iOS app. Please also note that the Firebase SDK for macOS is not officially part of the Firebase product, but it is community supported. You can find further info here.

The whole library is built around the UserManagerType protocol. The library provides the default implementation of it through the UserManager class, that you can instantiate directly or get through Dependency Injection.

RxFireAuth assumes that you have already gone through the Get Started guide on the Firebase Authentication documentation website. This means that:

In your Podfile, you can omit the Firebase/Auth reference as it is already a dependency of this library and will be included automatically.

To support OAuth providers such as Google SignIn, you also have to add the following to your AppDelegate:

Or, if you're using the library on macOS, add the following to your AppDelegate:

You also have to register the redirect URL for your app in the Info.plist:

RxFireAuth offers several ways to interact with Firebase Authentication in a simple and reactive way.

One of the things that RxFireAuth aims to simplify is the ability to build a Register/Login screen that works seamlessly for new and returning users, also considering the ability of Firebase to create anonymous accounts.

Delay sign-in as long as possible. People often abandon apps when they're forced to sign in before doing anything useful. Give them a chance to familiarize themselves with your app before committing. For example, a live-streaming app could let people explore available content before signing in to stream something.

Anonymous Accounts are Firebase's way to support this situation: when you first launch the app, you create an anonymous account that can then be converted to a new account when the user is ready to sign-in. This works flawlessly for new accounts but has a few catches when dealing with returning users.

Use the following method to login using an email and a password:

The allowMigration parameter is useful in the situation that we've just described: there is an anonymous account that has to be deleted and replaced with an existing account. When set to nil, the library will return a Single that emits the UserError.migrationRequired error to give your app the chance to ask the user what they'd like to do with the data they have in the anonymous account. 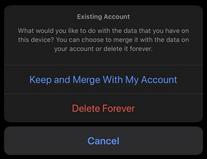 When the user has made a choice, pass either true or false to get the same value circled back to your code after the sign in procedure completed successfully.

If you are thinking of providing alternative ways to login into your app, RxFireAuth's got you covered.

When signing in with an external provider, it is always good to just let the user sign in and then figure out later if this is their first time or not. Additionally, it is common practice to let people connect different providers along with their email and password credentials. Giving people flexibility is always a good choice.

Let's use the same short story from before, but Mike is now going to use Sign in with Apple.

When using Sign-in with Apple (or any other provider, such as Google), you'll find yourself in one of these cases:

With RxFireAuth's login method family, all of these cases are handled automagically for you.

All of the possible cases are handled automatically for you by calling:

These functions are available in implementations of LoginProviderManagerType, such as the UserManager class that we're already using.

You can use the updateUserDisplayName parameter to automatically set the Firebase User displayName property to the full name associated with the provider account. Keep in mind that some providers, such as Apple, allow the user to change this information while signing in for the first time and may return it for new users only that have never signed into your app before.

This function will behave as the normal sign in, returning UserError.migrationRequired, if an anonymous account will have to be deleted and allowMigration is not set. When this happens, you can use the following function to continue signing in after having asked the user what they'd like to do:

The login credentials are embedded in the migrationRequired error and, except for particular cases, you shouldn't need to inspect them.

You can get the profile of the currently logged-in user by calling:

or by subscribing to:

This Observable will emit new values every time something on the user profile has changed.

Once signed in, you can inspect the authentication providers of the user by cycling through the authenticationProviders array of the UserData instance. For a list of the supported providers, see the Provider enum, in LoginCredentials.

When performing sensitive actions, such as changing the user password, linking new authentication providers or deleting the user account, Firebase will require you to get a new refresh token by forcing the user to login again. RxFireAuth offers convenient methods to confirm the authentication using one the supported providers.

You can confirm the authentication using email and password:

These protocols are fully documented, as all of the involved structs and helper classes.

You can find the autogenerated documentation here.

On iOS, when included via CocoaPods, it also needs:

On macOS and when included via Swift Package Manager, GoogleSignIn is replaced by:

All contributions to expand the library are welcome. Fork the repo, make the changes you want, and open a Pull Request.

If you make changes to the codebase, I am not enforcing a coding style, but I may ask you to make changes based on how the rest of the library is made.

This library is under active development and it can be considered stable enough to be used in Production.

Even if most of the APIs are pretty straightforward, they may change in the future; but you don't have to worry about that, because releases will follow Semanting Versioning 2.0.0.

RxFireAuth is distributed under the MIT license. See LICENSE for details.

This version focuses on making sure that all actions are wrapped inside an Rx object correctly. Plus, all Firebase errors are now wrapped inside UserError cases.

This version improves how clients can update a User profile.